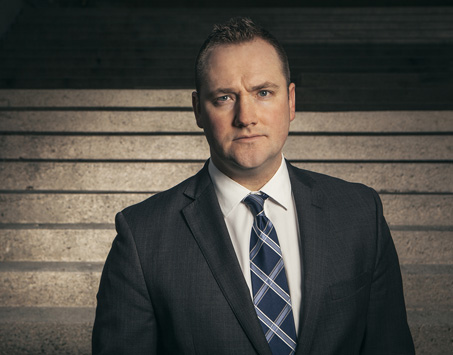 Mr. Michael A. Beckett is a Metro Vancouver criminal defence and trial lawyer. He defends individuals from all walks of life who are facing a wide variety of criminal and quasi-criminal charges. Mr. Beckett’s clients have included the homeless, drug addicts, the mentally ill, youths, gangsters, students, a retired police officer, nurses, business people, doctors, lawyers, and a professional athlete and reality television and film star. Mr. Beckett has also advised entrepreneurs in the medicinal marijuana and online gambling industries to help them ensure that their business practices comply with the law. Mr. Beckett has experience before all levels of court in British Columbia, including Provincial Court, the Supreme Court, and the Court of Appeal. Though he practices primarily out of Metro Vancouver, Mr. Beckett has also represented individuals facing criminal charges in Provincial Court and the Court of Queen’s Bench in Alberta and Saskatchewan. In addition, Mr. Beckett has advocated before administrative tribunals, including the Mental Health Review Board of British Columbia, where he has obtained favourable outcomes for individuals found Not Criminally Responsible on account of Mental Disorder. Mr. Beckett has even assisted clients outside of Canada by liaising with counsel in Washington, Arizona, Nevada, and California.

What You Get When You Hire Mr. Beckett

As an associate at one of the top criminal law firms in British Columbia, Stern Shapray Criminal Lawyers, Mr. Beckett has access to many valuable resources, including a well-respected team of highly-skilled lawyers with over a century of collective experience in defending criminal and quasi-criminal cases. Regardless of how simple or complex your case, Mr. Beckett uses all the resources at his disposal to provide you with prompt and attentive service and a full and forceful defence that leaves no stone unturned in his relentless pursuit to achieve the best possible outcome. When you hire Mr. Beckett he will:

Mr. Beckett obtained his Juris Doctor from the University of British Columbia’s Peter A. Allard School of Law, where he focused his studies on criminal law and trial advocacy. He began representing defendants in criminal proceedings in his first month of law school and continued to do so throughout his studies and articles. During law school he was the President of the UBC Criminal Law Club, a clinic head for the Law Students’ Legal Advice Program, a graduate of the UBC Criminal Law Clinic, and a summer student for one of Vancouver’s largest and most sought-after criminal defence firms, where he returned to complete his articles after graduating from law school. Throughout these experiences Mr. Beckett has been trained and mentored by some of Canada’s most skilled, experienced, and respected criminal defence lawyers.

Before Becoming a Lawyer

Mr. Beckett was born and raised in Calgary, Alberta, where he grew up and played competitive hockey for many years. Prior to attending law school Mr. Beckett attended the University of Calgary where he studied Business, English, and Philosophy, and graduated with Honours.

If you are currently under police investigation or are facing a criminal or quasi-criminal charge in British Columbia, Alberta or Saskatchewan and would like to hire Mr. Beckett to defend you—contact him NOW to confidentially discuss your case for FREE!